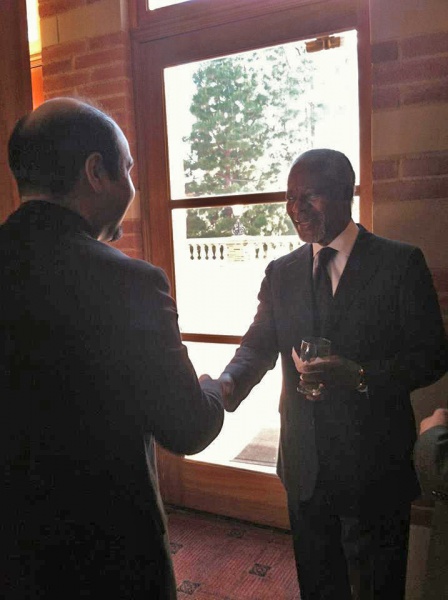 Back in May, Kofi Annan presented at the Luskin Lecture for Thought Leadership at UCLA. The format involved 30 minutes of   speech followed by 30 minutes of questions moderated by journalist Laura Ling, herself a UCLA alumni. The lecture was informative, interesting, and highlighted his experience at the United Nations and his hopes for the future.

I found Kofi Annan’s address at UCLA interesting and illuminating for a variety of reasons and it allowed me a chance to really see the person who was the head diplomat for the world. I found him to be a soft-spoken, polite, and intelligent man who was a sincere optimist and who grounded his optimism in the dirty reality that is international politics. He mentioned a few things that seemed to be his personal projects and focuses for international politics and diplomacy, the first of which was the AIDS epidemic in Africa. He talked about how he worked to get major pharmaceutical companies to meet in Holland to agree to fixed lower prices. When they complained about being accused of fixing prices, he wryly remarked that they were fixing prices to lose money, not gain! He followed this up with an interesting anecdote about how one of the pharmaceutical companies were suing Nelson Mandela for making a generic and affordable drug to deal with the epidemic in his country of South Africa, to which Kofi Annan remarked, “You are suing Nelson Mandela about AIDS. In South Africa. If you lose, you lose. If you win, you lose, you lose.” A poignant, albeit entertaining anecdote, that hopefully illustrated to the pharmaceutical company the inherent callous cruelty of worry about profit in the face of something like AIDS.

He was also very adamant about reforming the United Nations Security Council. He said it was something he was unable to do during this tenure as Secretary General, but hoped that there was still a chance. He reflected on the Security Council, which is the decision-making body of the United Nations on peace and security matters and is comprised of 15 members, of which 5 hold veto powers. Those 5 nations are China, France, United Kingdom, United States, and Russia, reflecting the superpowers at the end of WW2. The fact that this body continues to carry on in a form unchanged from WW2 without acknowledging the changing international field is a problem in the eyes of Kofi Annan. He mentioned how the African nations, the Middle East, and growing powers like Brazil are not reflected in the Security Council and how reform should be undertaken to update the council to reflect more modern times.

These two projects stuck out in his lecture, though he mentioned others. He then spoke more generally about things, like employment for youth as a means of ending violence and terrorism–something that I myself have championed–and what it takes to be a diplomat. To illustrate the character of a diplomat and as a means of explaining the necessity of meeting dictators and oppressors he said, “For the sake of saving lives, sometimes you have to shake hands with the devil.” I thought this a particularly powerful remark that highlighted the difficulties of being a diplomat and how you have to work for a greater good even when it comes to doing something less than pleasant like meeting a tyrant.

He also talked about his experience with the Iraq War, remarking about its illegality of invading and the trouble it has caused, but ultimately shied away from naming names, or vilifying any single nation or leader. In this he was a true diplomat. He also remarked on Syria and its growing threat. He did advise against military intervention indicating that while military intervention could be useful it should be used in a balanced format; as a last resort, but before things were too late. He pointed out that military intervention in Iraq was an example of failing that balance. He also touched briefly on the difficulty of dealing with the United States under its previous administration and how things have been improving recently under the new administration, but again was diplomatic and circumspect in his commentary.

While overall an optimistic lecture, he did reveal quite a bit about the realities of being a diplomat and dealing with the international politics of our modern age. He concluded the lecture with some personal anecdotes of his time studying in the US and some words to students. After the lecture, I was able to meet Kofi Annan and found him pleasant and a bit of an introvert. I walked away admiring him for all his hard work and for all he had to deal with during his time as Secretary General. While I am sure he has regrets and there are things he could have handled better, I feel that this was a man who did the best he could and was sincere in his attempts.