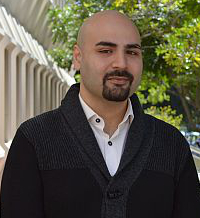 Dr. Ali A. Olomi is a writer, historian, and scholar of Middle East and Islamic history specializing in intellectual and cultural history with an emphasis on how the Middle East relates to and encounters the broader Mediterranean world. He is Assistant Professor of History at Penn State Abington and an Affiliated Scholar with the Rutgers Center for Security, Race, and Rights. He received his bachelors from UCLA’s College of Letters and Sciences and Masters and Ph.D from the University of California Irvine. He is a social and political commentator with a keen interest in the historical underpinnings of current events.

He’s taught at the University of California Irvine and Loyola Marymount University.

Ali is a historian of medieval and modern Islamic thought, studying how religion and science intersect with empire and identity and how Muslims imagined their world through cosmological and geographic writings. He works on the history of early astronomy and its use by Muslims in constructing the idea of the “Islamic world.” His scholarship examines the role of the monstrous other through the jinn and other mythic creatures. He also examines the intersection of apocalypticism and politics.

He has additional research and teaching interests in empire and colonialism, modernity, gender and sexuality, history of religions, mysticism, folklore, and esotericism, Muslim-Jewish relations, historiography, pedagogy, and critical theory. He has an interest in world history and situating the the Middle East in a global perspective.