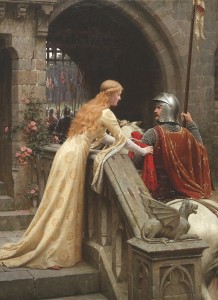 The world “love” conjures a cornucopia of images, from the salacious to the cute. We take for granted love as a timeless emotion, but people have conceived of love differently throughout history. For much of world history, there were different types of love. Romantic love was predominantly a Medieval conception influenced by interaction with the Muslim world.

In Christian Europe, chaste love, or love for the sake of Christ between virgins as a form of social contract was the dominant expression of love, while passions were considered an overabundance of humors, fluids, or bio-spiritual imbalances. Ideal love was committed, but restrained.

In the Islamic world, love was seen in contradictory ways as both ennobling and insanity. Love was expressed in passionate and sensual forms through poetry and literature. From the 10th century Kitab al Aghani there are accounts of passionate and sweet love stories between star-crossed lovers. Homoerotic poetry like that of Abu Nawas or accounts in Ali ibn Nasr al Kitab’s Jawami al-Ladhdha regaled readers with stories of love that was passionate, maddening, but noble and beautiful.

Love in the Muslim world was passionate, sensual, both a spiritual state of frenzy and an appreciation of physical beauty. In Europe, aesthetic appreciation was not directly related to love.

Contrary to claims of a clash of civilizations, the Muslim world and Europe interacted in intimate and constructive ways.

Europe’s contact with the Muslim world through the Crusades and Al Andulus transported Muslim notions of love where they fused with a revival of Ovid’s Ars Amatoria in the troubadour culture of courtly love. Wherever there was contact with the Muslim world, there sprung up romantic love. Aquitaine, Sicily, and Champagne all became centers of troubadour culture where bards wove tales of star-crossed lovers, secret trysts, and maddening passions that would overtake the senses.

In the 13th to the 14th century, authors like Geoffrey Chaucer and Dante popularized the sensual love common in the Muslim world. The romantic love of poems and stories quickly became associated with Valentine’s Day.

Europe fell in love thanks to Muslims.

Even the general structure of love stories paralleled what we find in earlier Muslim sources. The story of Layla and Majnun tells the tale of two young lovers from different social strata, forbidden their love by parents, the killing of Layla’s brother by Majnun, and the eventual tragic death of both for they could not live without each other. The architectonic of Shakespeare’s Romeo and Juliet builds upon the earlier Muslim blueprint.

« New Article: ORLANDO TRAGEDY AND THE TANGLED HISTORY OF JIHAD AND HOMOSEXUALITY
Head On History Special: Muslims and Christmas »