This page is dedicated to archiving the cultural heritage sites destroyed or being threatened by the Islamic State of Iraq and Syria (ISIS/ISIL). The page includes a photo archive of major cultural sites with information about each as well as resource links for further information. Will be updated regularly. 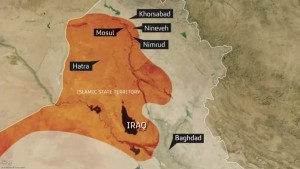 ISIS and its actions have captured the imagination of the public with growing horror since 2013 and early 2014. Though various manifestations and iterations of the group have existed since much earlier, it was not until their surprising victory over Iraqi forces and the subsequent seizing of territory that they made headlines. Their path of destruction has been chronicled by major media outlets, with emphasis placed on some of their actions. Various political pundits have engaged in trying to explain the group’s existence and coordinate a military response. That is not the aim of this project.

On this page, I intend an archival project focused specifically on ISIS’ destruction of cultural sites. While other resources exist that report on the destruction, this site will be focused on gathering together the disparate resources across disciplinary boundaries in order to build an archive around specific thematic questions. While I do not propose to have the answers to said questions at this time, it is my hope that this archiving will become a resources in which to interrogate and theorize these acts of destruction which in turn will fit into a wider project about the group itself.

These are some of the questions that inform the intent behind this project. Mapping these questions will form a backbone or spine that will give shape to the archiving project itself. As I collect and archive from various sources, it will be to provide a resource base upon which to begin answering the questions. This also situates this current project in a wider dissertation proposal.

At this current juncture, I am focusing on archiving those cultural sites in and around Mosul where ISIS/ISIL is concentrated. The map above lays out some of the major sites targeted and destroyed by the group. ISIS/ISIL has predominantly focused on several cultural sites as part of their campaign to purge their state of “idols” and to re-imagine the region through their interpretation of a Islamic history.  This includes pre-Islamic sites, Shia, Sufi, Sunni, and Christian sites.

I will archive any reports of cultural sites being destroyed and place them here to produce an archive that can be interrogated and read with the thematic questions in mind.

While reports indicate that ISIS/ISIL is engaged in aggressive erasure of historical sites, there are lots of conflicting news. ISIS/ISIL has claimed to destroy sites which later turn out to not be destroyed, or at least not yet.

Despite this, the damage to the cultural landscape is undoubtedly severe with many items and sites completely lost. 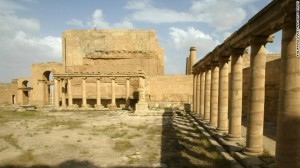 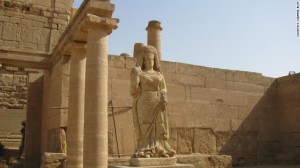 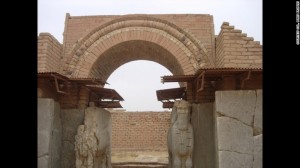 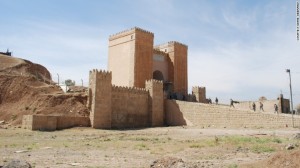 Nineveh- Neo-Assyrian city damaged by ISIS/ISIL. Was under reconstruction and repair. Original reports indicated damage to the walls, but these were later discounted as propaganda. Damage to the inside of the city confirmed. 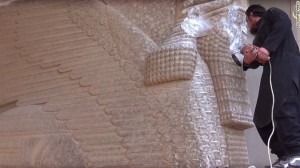 Mosul Nineveh Museum- Defaced Lamassu Statue from Nineveh kept at the Mosul Museum. No complete catalog of artifacts or items in Mosul Museum found, but reports of several statues being destroyed with sledgehammers.   Damaged on February 26 2015. 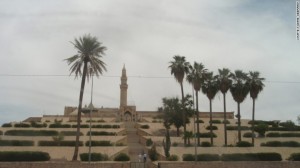 Masjid al Nabi Yunus (Mosque of Jonah)- Tomb of Prophet Jonah, sacred to Muslims and Christians. Near Nineveh. Conflicting reports indicate destruction on July 4th, but confirmed July 24th 2014 to have been destroyed. 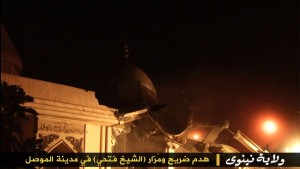 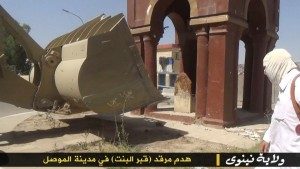 Qabr Al Bint- Alternatively believed by local legend to be grave of girl who died of heartbreak, or according to historians the grave of Ali ibn Al-Athir, Sunni historian who traveled with Saladin. Tombstone may be a replica with “real” spirited away. Destroyed June 2014. 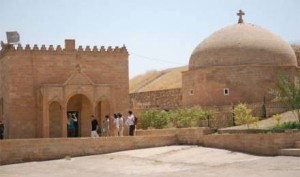 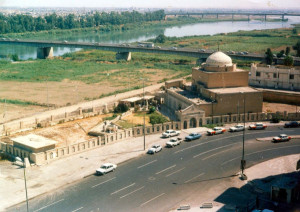 Anderson’s book theorizes the nation-state and nationalism as centered on an imagined community with a horizontal communion of its members, permeable boundaries, sovereignty of the people, and a shared past. Employing Marxists methods of historical materialism, he traces the origins of the nation-state and nationalism to print capitalism with the decline of sacral tongues and the rise of the vulgar languages. The section on museums and their connection to the nation and control of the past is most useful to analyzing ISIS and its activities.

A good introduction into the origins and theory behind the state in Islamist thinking. The article explores the political thought of Islamism, the manner in which the state is conceived, formed, and the role it plays in the objectives of Islamist movements. Seeing as ISIS envisions itself as an Islamic state, understanding where it fits into the wider body of theory is important.

Walter Benjamin’s work has become an important place of contemplation for historians. The Arcades Project, a wonderfully enigmatic work that some believe is incomplete while others believe is deliberately archived and collected in a haphazard way, is an important revelation of a certain way of doing history. Using the arcades of Paris, he presents a history of class and production. In a way, he uses the arcades as monuments and archives to be read. His methodology will likely prove highly useful to reading the monuments and sites of Iraq.

Cohn’s work looks at the link between colonialism and control over forms of knowledge and their institutions. His analysis of the way knowledge and power inform one another is along the same vein of the theories of Foucault though his focus is on British India. His chapters on the relationship between colonialism and control of the past is particularly important for ISIS’ destruction of cultural sites. ISIS claims to be shaking off colonial vestiges through its transgressing of boundaries and destroying of museums and cultural sites.

An important look at the situation in Bosnia with the destruction of a cultural site and its intersection with genocide. This article helps to shed light on the geographic sites and lived places and how violence to the body intersects with violence to architecture. It would be a useful article to mine for theoretical insights.

Derrida’s important work, Archive Fever has become a central piece for all those engaged with the archive. He deconstructs the archive as connected to power and memory. In particular, he draws upon Freudian notions of the unconscious which inform his interpretation of “traces” as physical markers of memory on the body. This theory can be extrapolated to monuments and provides a tool of understanding cultural sites as archives, layered, and retaining traces of the past.

An important monograph on India’s Deccan Plateau that provides an insightful investigation into the way architecture and memory intersect and how contestation of those sites transform them into sites of power. Control of the sites equals control over the memory. This provides interesting ways to think about ISIS and their control and destruction of cultural sites as exercises of power over memory.

This monograph looks at the sacred shrines of Sufi saints as centers of memory, genealogy, and embodied sites of religious meaning. Shrines are deeply tied to mobility as they are pilgrimage sites, are linked with verbal utterances of remembrance, and movement. Islamist destruction of these shrines mirror some of the destruction carried out by ISIS. This book can provide an opportunity to think through ISIS’ destruction as well as theorize the cultural sites themselves and their role/function in Iraqi society.

An important book in understanding the role of text and language in the Islamic world. An exploration of how writing and power intersect in the form of texts and authority. Messick traces the evolving relationship between authoritative texts and Muslim society. This relationship is of particular interest in understanding ISIS and its acts of destruction which involve shrines that contain texts in them.

A powerful  longue durée history of the city of Cairo that employs an interdisciplinary approach. In the work, Raymond not only presents a history of the city but demonstrates how to read a city through urban design, archaeology, and architecture. The result is a city seen through historical layers from the Arab conquests until the modern era. This particular methodology is useful in thinking through some of the ancient Iraqi cities.

Robinson’s article provides an analysis and introduction to different Islamist formations and movements in the Middle East and situates the Iraqi insurgency into this wider history. He groups Islamist movements into three groups and identifies their different aims and methods. This article provides important contextual knowledge for understanding the emergent group of ISIS and how it fits into other Islamist movements and its relationship to them.

Taussig’s book theorizes the act of defacement and how through destruction and defacement value is attached to an object and it is made sacred even in secular settings. He works through ideas of transgression and public secrets and explores the connection between defacement and the sacred. This is an important theoretical text for understanding the acts of destruction ISIS is committing and how the very acts themselves may produce value in the objects.

This article provides important background in understanding the various state formations of the Levant and how this intersects with religious identity, affiliations, and institutions. The work destabilizes the fundamental understanding of the nation-state and instead provides a look into how state formations intersect with different identities and less formal institutional organizations in the Near East. This work is important for understanding the logic of state formation and its complexity in the Middle East and how this complexity is part of the ongoing conflict between ISIS and the states it is at war with.

14. Trouillot, Michel-Rolph. Silencing the Past: Power and the Production of History. Boston: Beacon Press, 1997.

Trouillot’s work is an important intervention in Haitian history and in the discipline of history itself. He unveils an intimate relationship between knowledge and power and how that power shapes the narratives of the past into what is written, what is occluded, and what is unthinkable. He pinpoints areas in which silences occur in the writing of history. This work is important for any attempt at writing a history of ISIS and their actions as a means of examining dominant narratives for silences.

Cultural Heritage Monitor– Submit photos of cultural heritage sites that are threatened or being destroyed.

Iraqi Institute for the Conservation of Antiquities and Heritage– Education in conservation and preservation dedicated to dealing with Iraqi Cultural Heritage Crisis.

“Slaying Saints and Torching Texts” at Jadaliyya– Emily O’Dell looks at the destruction of Sufi shrines in Mali and the international discourse as well as the discourse of the destroyers surrounding the shrines.

Gates of Nineveh– WordPress/blog on on archaeology of the Near East and Assyriology with an ongoing exploration of the Iraqi Cultural Heritage crisis.

The Getty Conservation Institute– Working in partnership with World Monument’s Fund and Iraqi government, the Getty initiative aims to mitigate the threat and damage to cultural sites in Iraq. Involves training, building a database, and resources for conservation.